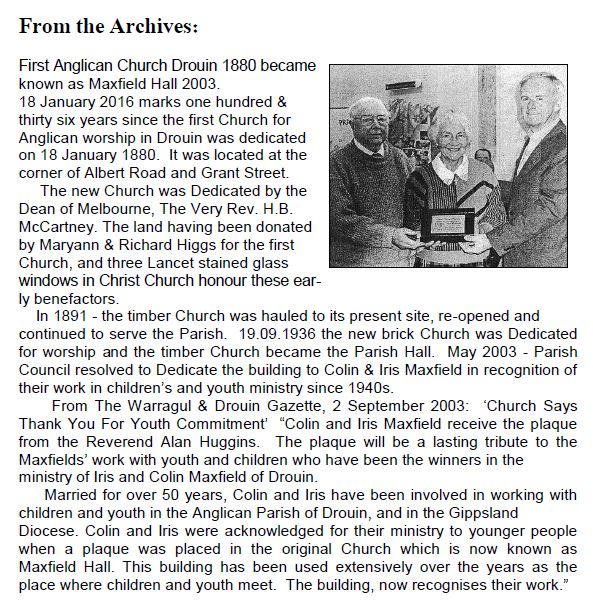 Drouin in the 1870s was a cluster of a small houses and settlements when John Lardner, Government Surveyor, arrived in the area soon after 1870.

Land was being sold and Drouin Junction grew due to the development of the Railway into Gippsland from the west. By 1878 Drouin Junction had become Drouin with a post office, banks, hotels, and stores, and the first meeting of the Shire of Buln Buln was held 27 November.
The arrival of Railway services meant the demise of business and commerce in Brandy Creek and Buln Buln as people moved in favour of the growing towns of Drouin and Warragul.

During March 1877 the Bishop of Melbourne, Right Rev Moorhouse had traveled the coach road (later the Old Sale Road) into Brandy Creek and district. From this first visit Bishop Moorhouse vowed to bring the ‘means of grace’ to the selectors in the thickly forested lands of West Gippsland, in the form of the Gippsland Forest Mission.

That ministry was planned to serve a large area of the outlying districts from Moe to Berwick, and Neerim to San Remo. The Bishop approached the Reverend Percy Jennings Smith to assist in the task of developing the Anglican influence into West Gippsland. As Rev. Smith had just retired to his land at Brandy Creek; others who enlisted to assist in this work included: Lay Reader Captain Lintott, W. Witton (Methodist), and Reverend Samuel Sandiford.

Eventually Reverend Samuel Sandiford was appointed Superintendent on a full time basis to extend the work done by those before him in this developing region. His appointment marked the beginning of the Gippsland Forest Mission.

The first designated Church building to serve Drouin district:
c.1877: Church Services for the Anglicans, Methodists and Presbyterians of Brandy Creek were initially conducted in private homes, until land was donated by Mr James Hann.

1875:  St. James Church of England, Brandy Creek was opened by Reverend G.W. Watson.  The first Church building, of split palings and shingle roof, was replaced in 1896 by a more suitable timber Church.  That second Church building was later removed to Buln Buln in 1930 and remains in use in 2014.

Christ Church – Grant Street Drouin (Photo 1.)
1880: Sunday, January 18: Christ Church: Dedicated by the Dean of Melbourne, The Very Reverend H.B. McCartney. A Rectory was built next to the Church.

1880-1884: Services were continued by the priests attached to the Gippsland Forest Mission with assistance by a number of laymen.

1902: Additional block of land was purchased which increased the Church land on corner of Main Street and Francis Avenue.

Christ Church – The First Brick Church 1936 (Photo 4.)
1935 November 13: the first sod turned by the Rector: Reverend Claude Woodhouse. The new brick Church was sited closer to the Main Street. The timber 1880 Church may be seen behind.

1936 February 1: the foundation stone was laid by the Right Reverend C.H.Cranswick, 2nd Bishop of Gippsland. The plaque on the wall of Christ Church reads: 27 January 1936, the Service was moved to the later date due to the period of mourning following the death of King George V.

1945 September 29, Consecration of Christ Church by Right Reverend D.B. Blackwood, 3rd Bishop of Gippsland.
With the opening of the new brick Church, the 1880 timber Church took on the role of Parish Hall. During 1941-3 it was used as a post for the World War 2, Voluntary Air Observers’ Corp.
In 2011 this building was named Maxfield Hall and continued as the venue for many and varied activities for Christ Church and the community.

1969 October 5: New Rectory on Francis Avenue replaced the earlier 1914 building. It was Dedicated by The Right Reverend D.A. Garnsey, 5th Bishop of Gippsland.

This major extension to Christ Church was made possible due to the generous bequest of the late Geoffrey Allan McNeilly, and commemorates the McNeilly family of Drouin.
1870-1: John McNeilly brought his family and stock to his selection on the north side of Drouin township, and so one of the first settlements of Drouin was established. His name appears in the Church records and among the names of those who worked to achieve amenities and services for the benefit of early Drouin and its citizens.
1871: The Survey Team of John Lardner camped at the McNeilly Settlement. 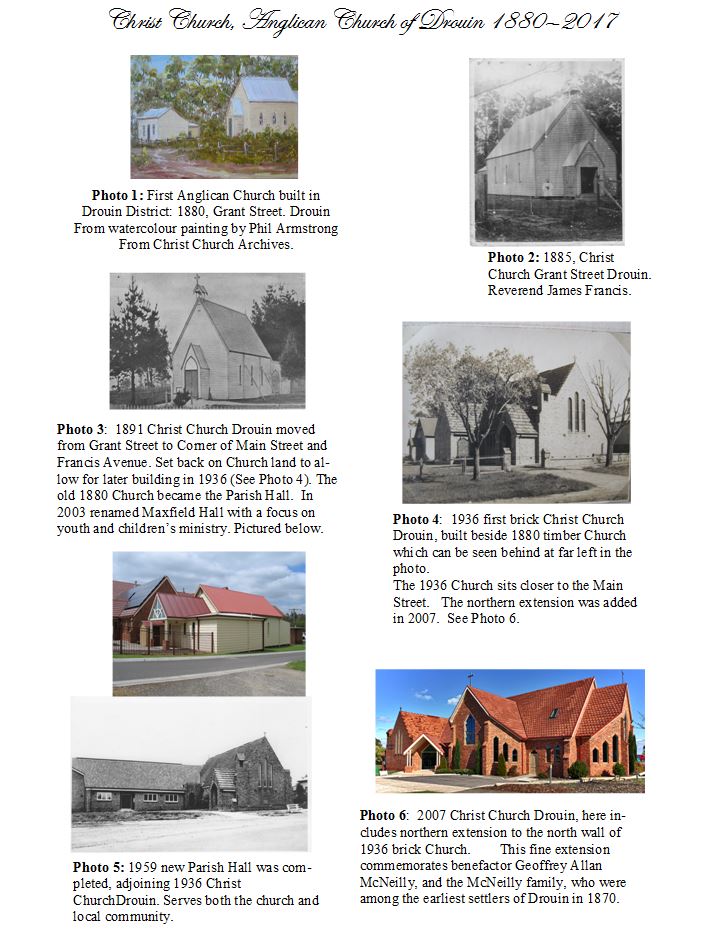 Drouin’s Christ Church is fortunate to have an extensive collection of stained glass windows commissioned for the church from the 1930’s by Jean Orval, a gifted artisan.

To see the some of the collection and other regional churches fortunate enough to have his work go to this link: http://www.orvalstainedglass.com/ 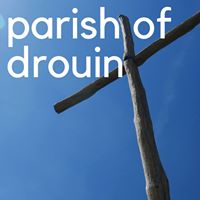 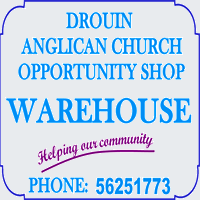 The Anglican Parish of Drouin is committed to ministering to children, young people and vulnerable adults by providing an environment that is physically, emotionally and spiritually safe.

Concerns about our ministry? Visit information about Safe Ministry in the Anglican Diocese of Gippsland. To make a confidential complaint or enquiry, contact the Diocesan Director of Professional Standards, Ms Cheryl Russell on 0407 563 313 or 035633 1573 or via email cherylrussell1@bigpond.com

COPYRIGHT-Anglican Parish of Drouin by The Trusts Corporation of the Anglican Diocese of Gippsland is licensed under a Creative Commons Attribution-Non Commercial-No Derivs 3.0 Australia License.